Wow, this week has been a doozy! Between work, the Polar Vortex, a new design project, the Grammys, BIEBER, the Super Bowl shenanigans invading Times Square and Finn I didn’t have a free minute to sit and download a thought. 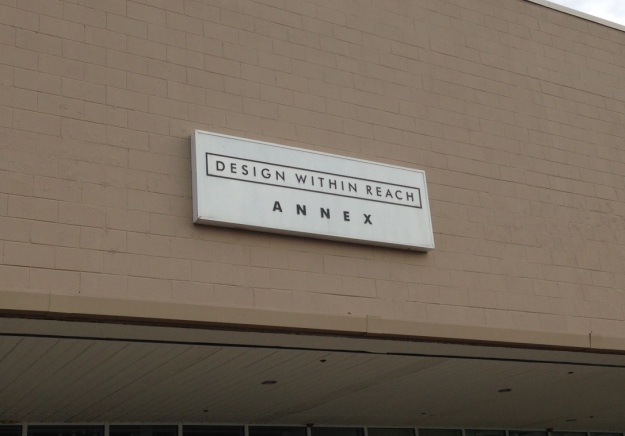 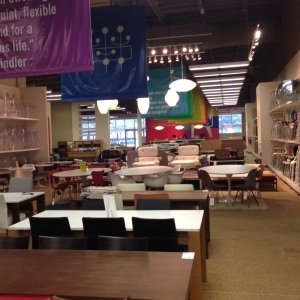 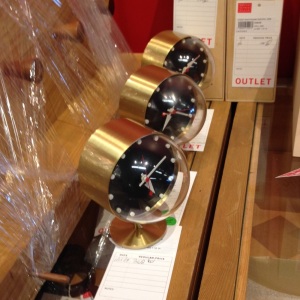 ▶ I started a new project a few weeks ago. It’s small for now but may turn into something more substantial in time. Regardless, after nearly 9 years living in the city, it finally gave me the opportunity to debunk the urban myth that is the Design Within Reach Annex in Jersey. I’m thrilled to report IT IS REAL AND IT IS HEAVEN, YOU GUYS. In truth their eBay shop has been a great resource for me in the past, but I never actually saw the Annex with my own two peep balls until just last week. (When you live in Manhattan getting to anything outside of Manhattan is a huge production–especially if you’re going to a place where you intend to procure a piece of furniture–so it’s not surprising it took a gig that is providing transportation for me to get out there.) I knew it existed, in theory–kind of like how winning the lottery or the simultaneous orgasm exists in theory–but I assumed it was less like a showroom and more like a warehouse of horrors. Lucky I was wrong. It was lovely inside and the saleswoman who helped me looked like Carmela Soprano, and let’s be honest when you go out to Jersey you can’t ask for anything more, right? I scored their beautiful Tripod Floor Lamp for less than half the list price simply because the shade had a bit of a dent. Most everything else there was in a similar condition as the lamp, with a minor scratch or chip resulting in a steep discount. Holy Holly Hunter In A Hand Bag there were so many other things I could’ve gotten! They had a dozen or so Gubi semi pendants in various colors and sizes, but regretfully I wasn’t in the position to get one for myself this time. Fingers crossed when I go back there will still be a few hanging around!

Within the last few weeks I’ve gotten a lot of questions about my replica Eames, how I feel about reproductions morally-speaking, where to find them, etc. and while I make no bones about having a Feames (fake Eames) I also make no bones about wanting a real Eames, so part of me was hoping I’d see one at the Annex at a reasonable price and convince myself to finally throw down the plastic. Well, I did find a few and the prices were comparatively reasonable but something about a $7,000 chair marked down to $4,500 still didn’t seem like a move I could make. I know, I know…#firstworldproblems

▶ What happened at the Grammys, you guys? I don’t know about you but I thought it was U.G.L.Y and, no sir, it did not have an alibi. Here’s the thing: the producers need to stop trying so hard to make these damn Grammy moments happen. Whoever thought Miranda Lambert and Billy Joe should collaborate on a tribute to Phil Everly should be stripped naked and gently beaten with watery deli meat. WHATEVER but something really degrading needs to be done to those producers, preferably at the hands of Kacey Musgraves. The person who thought it was a good idea to have her perform IMMEDIATELY after Kendrick Lamar and Imagine Dragons (one of the only good performances of the night) needs a thick slice of boiled ham across the face. Was it just me or could Carol King barely contain her bewilderment during her duet with Sara Bareilles, which was really less of a duet and more of a televised master class in which Sara should have just sat there and taken notes. (Side note: WHY was that album even nominated?) And is Pink now only moonlighting as a pop star because it felt like her job at Cirque Du Soleil is taking over what was once a very fun, non-acrobatic career? Wait. I take it back. She’s too far in to come back. If at this point Pink didn’t come out and perform on a trapeze I’d commit harakiri. Well done, Pink. Carry on. 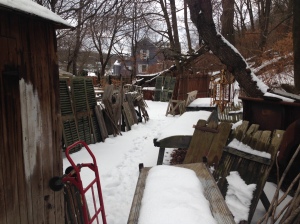 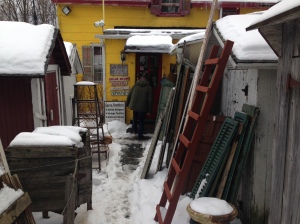 ▶ I went out to New Jersey a second time last week to source wood for a dinning table and some possible planter boxes I’m hoping to make for my patio once the weather gets nicer. The Gypsy Farmhouse is this kooky shack bubbling over with furniture made from barnwood salvaged from Amish farms in Pennsylvania. I was able to snag a stunning barn door table at an unbelievable price, though I wish I hadn’t gone the day after a storm–the property surrounding the house is littered with beautiful old planks dying to be made into something, but I couldn’t get to any of it. If I had on snow boots you can bet I would’ve leaped into the slush like Janice Ian into a big pile of girls. When it comes to DIY-ing I firmly believe nothing worth having comes easily, so it’s a wonder why I set out that day in a pair of converse, so unprepared to get my hands dirty. Live and learn! I did, however, get a fascinating tutorial from Patti, the owner, on how they make table legs from old farm beams. Ugh, how I wish I just had a radial saw and a workshop. My life would be complete. (There’s another joke in there somewhere about ‘making a slatted bench out of rainbows and smiles and we’d all sit on it and be happy’ but one Mean Girls reference is really all a post can handle so I won’t attempt it. TOO LATE.)

▶ I opened my mailbox this week to find Jonathan Adler and his husband laughing smugly on the cover of Dwell and all I have to say about that is really. Really? Is that what I need to be looking at when I’m going to work on the bus in the morning? No. No it is not. I don’t need to start my day by discovering how fabulous and successful Jonathan Adler is. THESE ARE THINGS I ALREADY KNOW. And things that make me feel bad about myself. And yet, there he is looking up at me, tanned and breezy about it all, not giving a fuck about my inferiority complex but instead wading in his infinity pool like he’s on his third afternoon cocktail. Ugh. UGH. The whole thing makes me want to vomit from the knot of self-loathing that builds in my gut each time I open to the article but refuse to read it. Refuse to read it but also choose to only acknowledge the emboldened quotes, which I feel is not really fair of me but the only thing I can do when dealing with someone who says they “use every square inch of the house with tremendous glee and gusto.” Gusto. God damn you, Adler. I hate you and I want to be you. 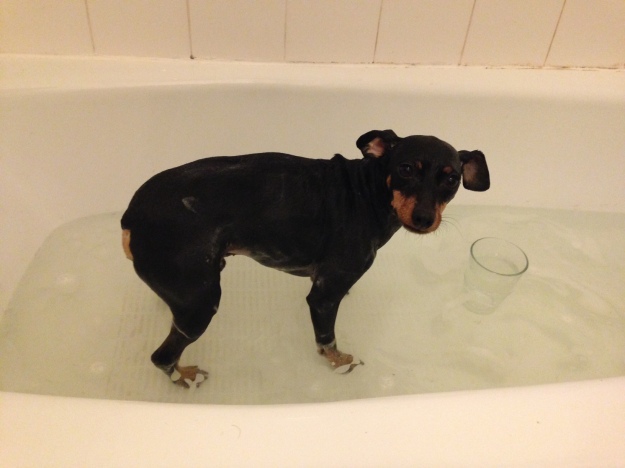 ▶ Mid-week Finn decided to start Halloween early this year by dressing as the trash underneath my kitchen sink and surprising me when I came home from work. Long story short I wasn’t laughing, but the result was a fresh-smelling pooch and a new locking garbage can from The Container Store. I thought I’d seen it all but I’m continually amazed by the new and inventive ways he discovers to raise my blood pressure. He’s 6 now–that’s nearly middle-aged–and I thought he’d be doing middle-aged doggy things but apparently he’s Benjamin Button-ing back into a puppy. At what point will he just settle down and be content with a Yoplait and an episode of Blue Bloods on a Friday evening? I’m still waiting but until then there are a barrage of cleaning products at the ready.

▶ Times Square, normally a circus, added a fourth ring when the Super Bowl came to town and eviscerated any shred of civility those of us who work in the area try so hard to maintain. Walking out of my office to get lunch was like being overtaken by a giant swell and dragged along by the undertow for three blocks, except this swell was full of drunk people who scream GO BRONCOS and ask how to get to the M&M Store. I’m a big football fan and I can’t wait for Sunday (go Broncos!) but I will be glad when Monday comes and the Ringling Brothers have packed it in and left town. 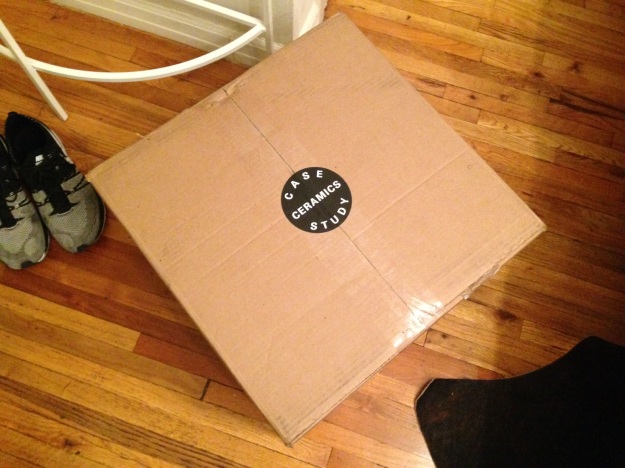 ▶ After a very long week it was so nice to come home to a happy little surprise from Case Study Ceramics sitting on my doorstep! What’s in the box? Spoiler alert: it isn’t Gwyneth Paltrow’s head (sorry, Coldplay fans) but it is a gorgeous planter I hope to have the energy to set up very soon.