I’ve been thinking about this a lot lately. Recently a friend of mine rather astutely (or shrewdly) told me he thought the whole business of design and renovation said less about how a person lives and more about how they don’t. Specifically he was referring to me and my resistance to process a failed relationship and how it had manifested itself in my apartment.

I said it was a shrewd observation, right?

I once dated someone who was really into astrology. He believed that, although we are all unique in our own different ways, our behaviors are ultimately determined by our signs. He used his apartment as an example. That thing–WOOF!–was styled within an inch of its life. He was a Cancer–the crab of the zodiac–and like a crab, with its soft, delicate abdomen, he thought of his apartment as his shell, the contents of which were the salvaged bits he assembled to protect himself against outside harm.

Now, to me, that kind of logic is one cat-skeleton-under-your-sofa away from appearing on Hoarders: Buried Alive but it was the first time I began to think about design as symptomatic of something greater than just an affection for pretty fabrics and Eames chairs. [By the way, this was not the relationship in question but I thank you, OK Cupid, for your devilish sense of humor.]

I don’t disagree with my friend. In fact I think he’s actually right, even if what he said made me want to curl into a ball and listen to Bon Iver in the dark. Why else do we jump through all the hoops of making an interior hospitable if not for the perception of an inhospitable exterior? Is that too big of a leap to make? Maybe. Do I care? No. I’m feeling very introspective today, so lay back and enjoy this metaphorical Slip ‘N Slide with me. I think a lot of it has to do with control (or the illusion of having it), which I totally admit about myself. Designing my space, designing other people’s spaces: a lot of it is about gaining control and eliminating chaos and feeling like choosing to place a plant here or put a lamp there is a way of coping with the pressures and emotional stresses in life and oh God I’m venturing into teen cutting territory what is wrong with me I should stop before I admit I dumpster dive to feel alive…

[Isn’t it fantastic how I can start off talking about design and bring it around to wrist cutters? Don’t you find that just CHARMING about me? No? Yea, me neither.]

I’m still not sure what design really is but I don’t think it needs to be only one thing, nor does it need to say only one thing about me or how I feel about myself. It says a lot about who I am! I use design to insulate myself from harmful things but I also use it to satisfy aesthetics. And I’m OK with that.

Now enough with the heavy stuff. Here’s a picture of Finn dressed as a sassy devil: 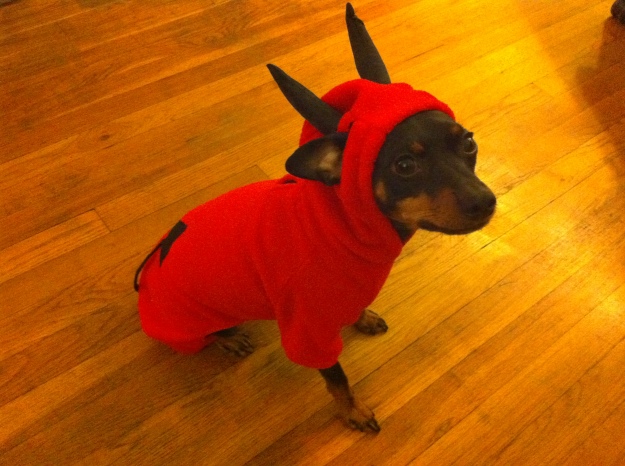